It always starts with the weather. At least that’s what I keep finding myself checking the morning of any appearance. Any other time, I never bother with it. Rain or shine I generally don’t pay it much more mind in dictating my day. But here it was, Saturday, and I was checking out the weather channel early in the morning, then going to their online site to see if it was going to look any better at the location that I had to go to that day. The appearance was for The Joyride at the Irwindale Speedway, which was a charity event by the ABATE Local #5 (a motorcyclist group) to help raise money for Five Acres orphanage. Five Acres is an organization that started as an orphanage in 1888. But for more about them, check out http://www.5acres.org . The truth was that the weather was miserably overcast with a high humidity and showers that had carried on through the night. The gig was going to be outdoors and if I was going to have a snowball’s chance of attending in my Bat-suit, it had better clear up.

I was asked to show up for this when I was appearing at the George Barris Auto Collection Auction last May by a lady named, Christina Bergstrom. She was taking pictures for George at that show and thought the kids would really like Batman. How could I refuse? It was just the sort of thing I’ve wanted to do. We kept in contact via e-mail and we decided that it would be cool to have Vickie there as Wonder Woman. But as the date got nearer it seemed as though George would be there with the Batmobile ( at least from what I gathered in one ad). This presented a different dynamic for Vickie. I would probably have to stick around the vehicle and she would not seem to fit in with the theme as well. So, we gave our buddy, Wally, a call to see if we could borrow the Batgirl suit for this appearance. We were already in the process of getting a Batgirl suit of our own made, but it was far from being complete for this show. Wally was infinitely cool about it and let us borrow it.
Just before leaving to drive out there and crossing my fingers about the weather, I checked my e-mail one more time. Bad news, it seemed that the Batmobile was NOT going to be there, but we decided to have Batgirl there anyways since she may go over big with the motorcycle crowd. Wonder Woman didn’t have her own motorcycle like Batgirl did. 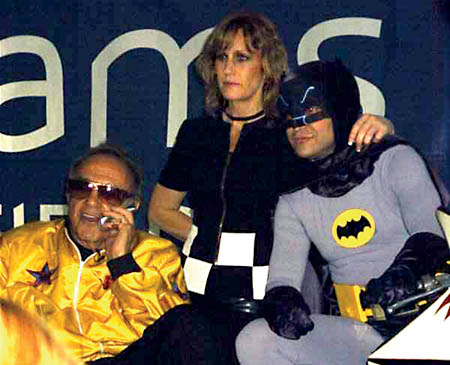 With George and Christina at the Barris auction

On the way there Vickie looked at my photo album of Batgirl pictures to study the poses and expressions. The poor girl had only a few hours to prep for this thing while I had been walking and talking like Batman for quite a bit by this time. Once again, we were on the road almost completely dressed in our costumes. Due to the wig piece, Vickie already had her cowl on. All she lacked was her, belt, gloves and cape while in the car. I on the other hand would need to don my cowl, belt, cape and gloves when we got there. We were doubtful of a dressing room there. We were doubtful of any toilet facilities other than a Port-O-Potty.

The weather looked dreadful overhead all the way there but the rain seemed to stay away. The parking attendants got a kick out of Vickie as we asked for directions to the event. Some strategic parking away from any possible onlookers and we were completely dressed for action.

It was 10:00 in the morning and this thing was scheduled to go on from 7:00am to 10:00pm. I didn’t think we would hold up that long for sure, but I at least figured that things should be getting pretty underway by this hour or at least soon after. The venue was a large section of the parking lot away from the race track for the merchants, food vendors, live bands and cars being shown on display. We instantly met up with Christina just outside the entrance, and she was already in high gear keeping the thing running like a well oiled machine. As soon as we walked into the main area we were greeted by Lance, a photographer who I had met at the Barris Auction as well. He proceeded to take our picture and complimented Vickie on how nice she looked. 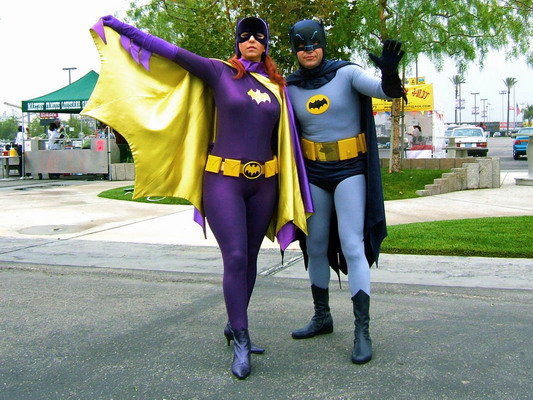 We walked around the entire location. It was a pretty spread out event with lots of booths full of motorcycle stuff ranging from leather goods, chrome plated manifolds to brass cleaners. The latter would possibly come in pretty handy for my utility belt buckle. Quite a few vendors asked us to come by their booth to get our picture taken with them. Some asked Vickie where her bike was. I knew Batgirl would go over well here. She told them that it was being detailed and that proper maintenance was very important when it came to motorcycling safety. She was a natural. 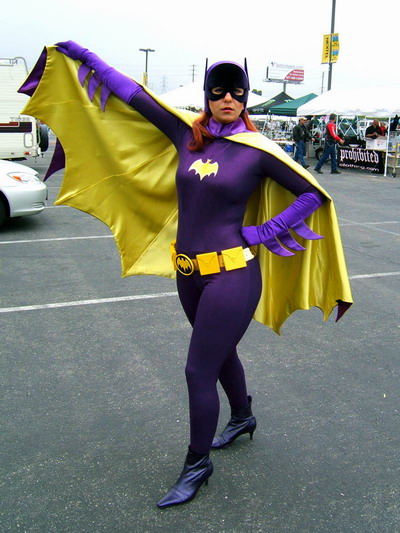 Some kids seemed rather excited to see us while some were a touch nervous but generally warmed up to us pretty quick. Once again we felt in our element of just spreading good will and generating smiles. 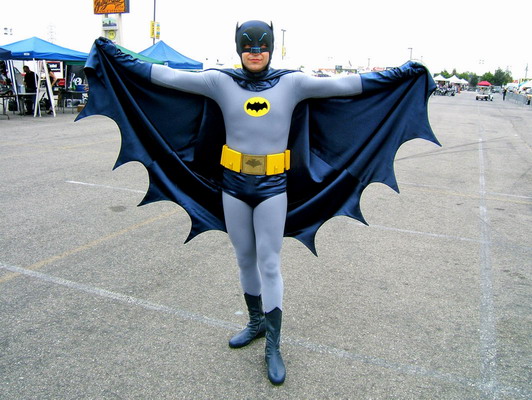 The weather was still gloomy but this was a mixed blessing. We were far from sweating in our tights so heat was not going to be a problem, but I think the weather also caused a poor turn out for the fund raiser. I guess people were reluctant to go to an outdoor venue with the possibility of rain. That truly was sad. 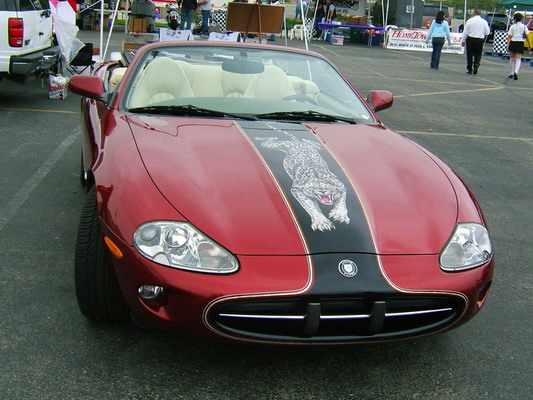 On a cheerier note, George Barris arrived in his personal Jaguar. He seemed to be surprised to see me and asked somebody “Is that MY Batman?” But when he stepped out of the car and got a look at Vickie he was asking a whole other set of questions. Things like “Why didn’t you bring her with you last time?” “We need to get her on the next gig for sure!” and “She’s great!” kept coming out of his mouth. It was too funny that he was so excited. Old buddies of George’s started coming around and it was off to getting pictures taken with vehicles. 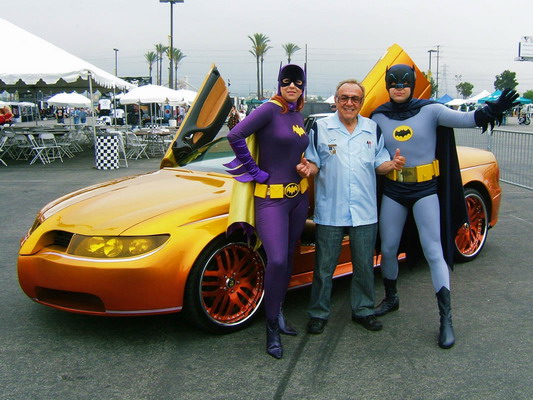 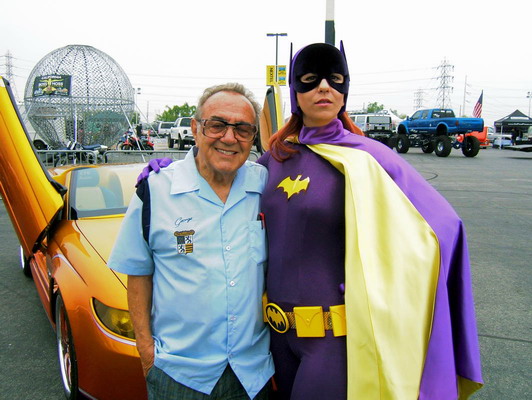 George wanted at least one picture of us with him for every car, motorcycle and person we came across. And every time he would have Vickie stand next to him and practically take her by the arm to the next photo op. She was quite popular. 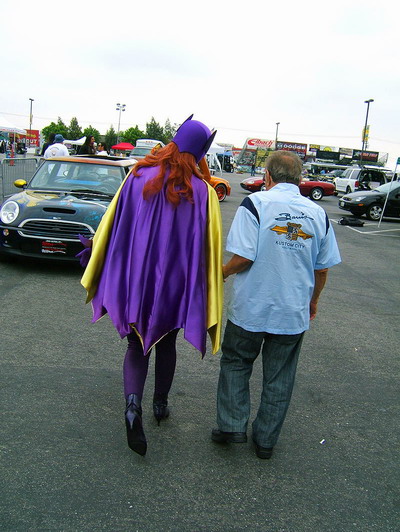 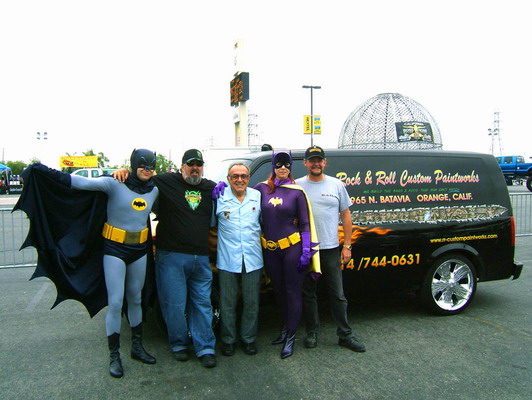 Pictures were taken to the sound of live bands from the stage. Some local cable news came by for an interview with George and even me about the event. Still, the crowds never really became crowds and as the next hour or so came, George left. 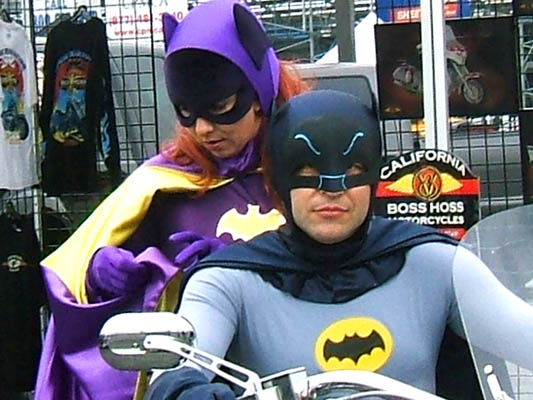 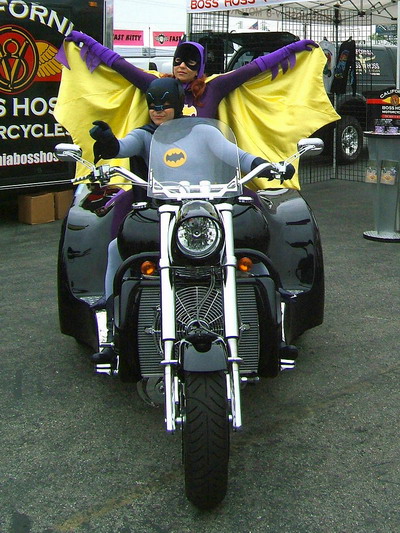 A photographer for Quick Throttle magazine came up and asked us if we would pose for some pictures by some bikes. Of course, we agreed. There happened to be one particular chopper there that was a purple/blue iridescent color and even had a slight bat-wing motif going on with it. It seemed perfect for a modern day Batgirl. The photographer did a very extensive photo shoot with Vickie with that bike, while many people assumed that she must have been there to help promote the bike since they looked like a perfect match. The owner of the bike had not thought of Batgirl at all when he built it but said that now he couldn’t think of it any other way. 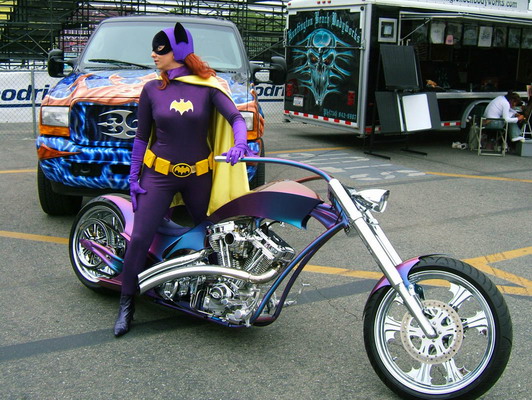 Once again, she was a hit. Other than people getting her name wrong with Catwoman and Batwoman being the most common mistakes, people were very thrilled to meet the two of us and always commented on our costumes.

Eventually, we were getting quite tired being on our feet so much and the costumes were getting uncomfortable. We had been at it for a steady five hours or so. We checked in with Christina and she suggested that we return around 6:00 at the race track for the evening’s races.

Since we were in about a ten mile distance from the place where we buy our comics, we drove out and picked up our respective titles in costume. Our friends got a thrill out of it and we were definitely a bit of a spectacle.

After a quick dinner out of costume and then going right back to the track in costume, we made our way through the people who were at the speedway for the evening races. There were many more people for this though we doubted that they actually knew about the Joyride itself. Still, lots of handshakes, pictures and even autographs took place. But as the sun started to set a good bit and the actual race was about to begin, we felt that it was time for us to go.

So after a long day of public meet and greet we made our way back home. It’s a good kind of tired. 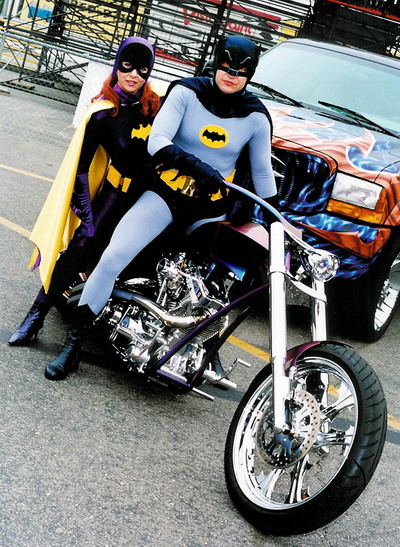 A pic sent to me from the Quick Throttle photographer