Sitting at the Wheel

Sitting at the Wheel

While I was standing at the counter of a local hobby shop looking for some 3M spray adhesive, I saw a small flyer taped to the side with a picture of a Batmobile. Imagine my surprise to find out that it was for a model show a few miles from my house for the next day that included photo ops with Nate Truman’s replica Batmobile.

Now, Vickie and I had an appointment about 50 miles away for one of our cats to undergo some follow up surgery. But we had about an hour window to go out to the show, get a picture or two and head back and get ready to take the cat in.

We got there this morning just before the show officially started. I showed up in costume. Nate and his family were a true joy to meet. He took the time to pull away the rope barriers and let me get my picture taken in a variety of poses. Nate gave me the “since you’re in full costume” treatment and took a lot more shots. 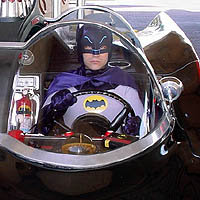 I can’t express the thrill it was to climb into the front seat and to put my hands on the steering wheel while in full costume. I’m still jittery thinking about it. A real dream come true.

After we were finished with our photo session, a guy in his 30’s came up to Nate to get his picture with the car. He then asked Nate (pointing at me), “can I get my picture with Batman too?” Nate looked to me and I stood by the man for as many pics he wanted me in. He looked to me, shook my hand for a shot and said, “Man, this is a dream come true.” That just about floored me.

I had to get going to take George (our cat) in, but still got asked before I left to pose with another kid who was just beaming. I guess if I didn’t have to go, I could have been doing that all day. I wish I could have. But, maybe another time.

I think the pictures say the rest. 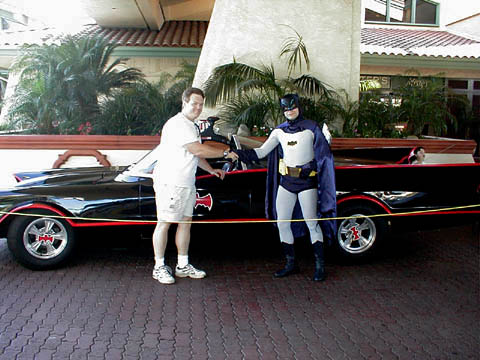