Sink or Swim – LIVE! (First Time Out in Front)

Sink or Swim – LIVE! (First Time Out in Front)

It’s funny how life will throw you a curveball for the good. When I first started writing and recording my own music, I always had the intention of singing my own songs while either fronting my own band or as a part of a creative group force. Early on, I practiced guitar as well as keyboards. But by the time I played my first live gig with a band, I happened to be in a band where we had a lead vocalist and such an amazing guitar player that I settled into the role as the keyboardist. Although I was still contributing songs, somebody else was singing them to the crowds. And it continued to be that way through the remaining bands that I played with live through the rest of the eighties and into the very early nineties. When I was recording the No Kings project with the musical partner, Terry Schambers, I started splitting the vocals chores between Terry and myself even with my own songs. But that band never did manage to perform live. Eventually, I began to record my solo effort “Sink or Swim” and began to sing all of my songs as well as tackle the guitar again. I released the album in the summer of 2012 but didn’t have any notion that I’d be able to put a band together who would want to perform this material with me fronting. So I believed.

It had been over twenty years since I performed live onstage in band until buddy JoJo-Anthony pulled me out of my dark studio to start playing some gigs with him and his live group The Sensational JoJo-Anthony Band. Instantly, I hit it off with the other guys that made up the band. Alan Alves on lead guitar, Tony Snow on drums, Jeff Olds on bass and Joe Servia on rhythm guitar were not only great musicians but genuinely nice guys that made practices and performances a fun and stress free experience. I always looked forward to our times together. Of course, JoJo was the adept lead vocalist and front man extraordinaire that him such a hit with his following. JoJo wanted to keep this band a fun experience and delivered in spades. At the same time, he was well aware that I had my own musical output that I had always pipe dreamed about performing live someday. So after a year of various gigs and good times, he hit me up about possibly performing one of my own songs during one of his sets. My first question I asked myself was “which song?” JoJo had a pretty firm idea which one I should run with but I ended up posing the question to Facebook community. I got plenty of feedback but the answers were so varied that I told JoJo that there wasn’t a song that stood out from the rest of my material as a definitive winner. So he suggested that maybe I should open for him on the next gig and use the Sensational Band guys. I loved the idea but wasn’t sure if they would be interested. While I wondered, JoJo went ahead and asked each of them if they would be game and they all said, “Yes.”

Was this actually going to happen after all these years? Was I actually going to perform my own songs with my own band in front of a live audience? I dreamt about this ever since I was a kid singing into my toothbrush in front of the bathroom mirror or air guitaring with a tennis racket. Now there were people making this happen. Slipped Disc Entertainment promoter, Bruce Kilgour set up a venue and a date for us to play. All was needed now was to prepare, practice and rehearse with the other guys who I now referred to as “Fine Company”. So the act was dubbed “Scott Sebring & Fine Company.” I got to do some one on one prep with a couple of the players before our first rehearsals and those were fun experiences in themselves. The rehearsals went smooth and I was overwhelmed by the eagerness of the band to please. I was so thankful and humbled. The experience of hearing others working on my tunes enthusiastically with such skill was a genuine thrill.

The night of the show came and I was once again blown away by the number of friends that drove many miles to come see me and show their support. Most them crowded a single booth and others stood like a congregation of Scott fans in the club before I even took the stage. It’s so nice to know good people. Once again, I felt so blessed.

The gang’s all here! 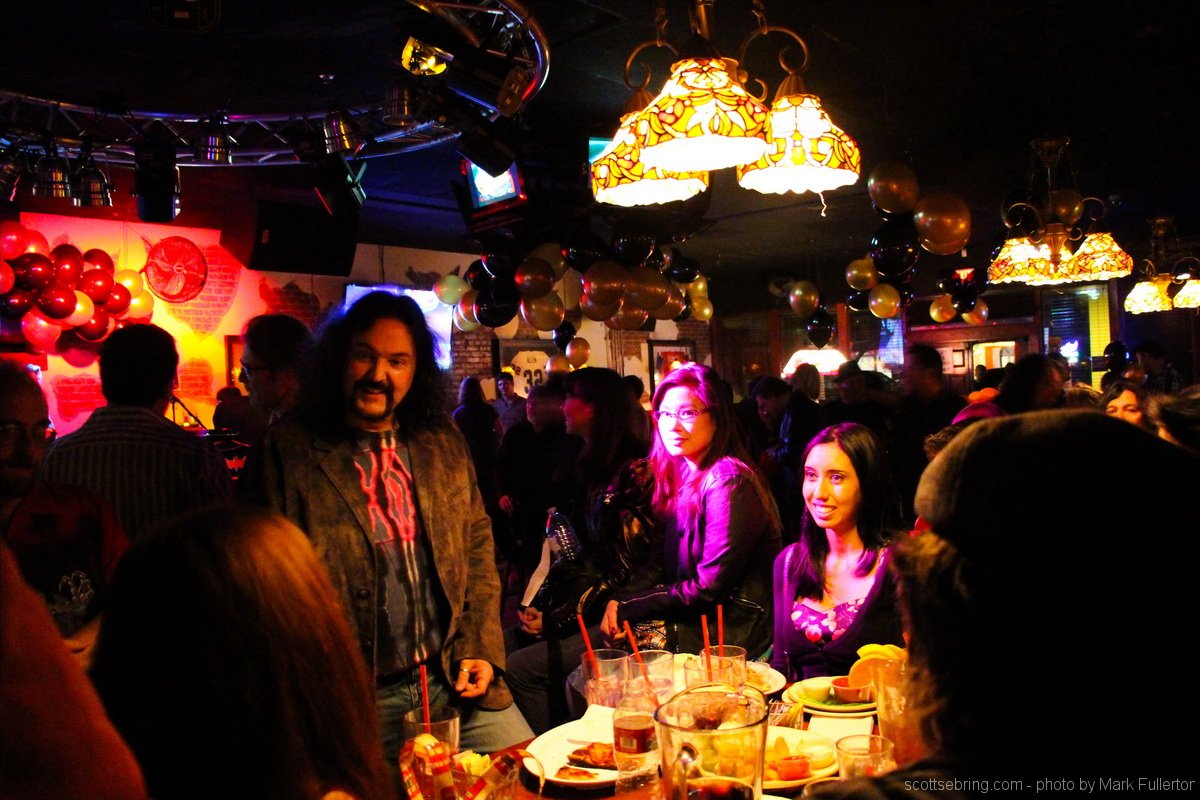 Wally was there as well to show his support 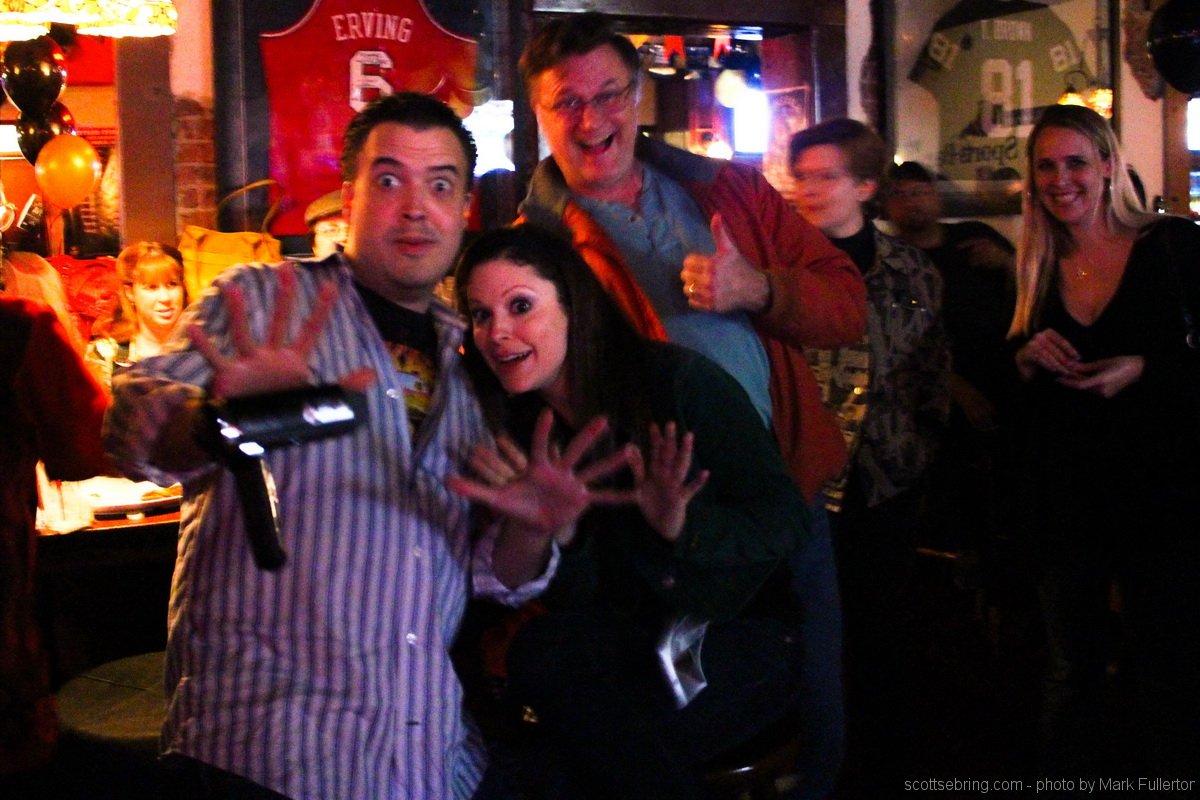 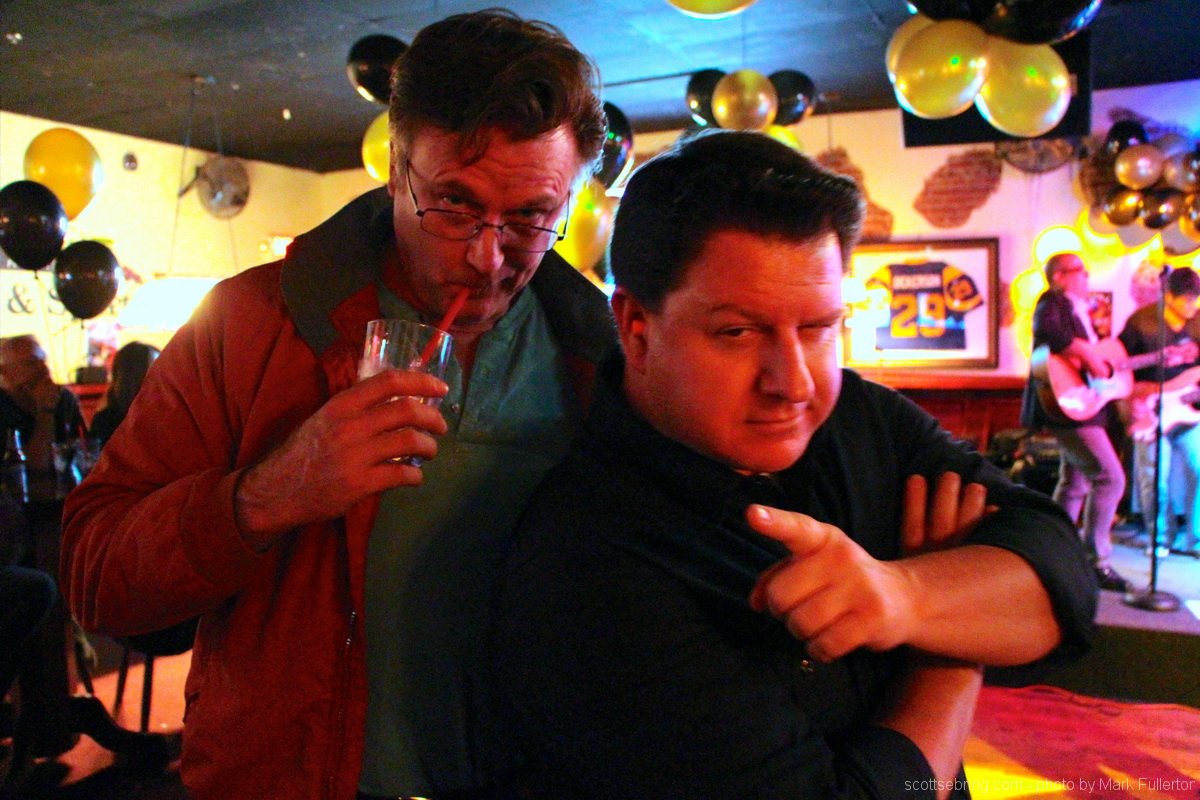 One is a cosplaying comicbook geek. The other is a cop. You figure out which is which.

Many performances in my past I’ve described as being a bit of a blur because I was so busy executing each bit of business to reach the end successfully until the next thing you knew it was over. This show was different. I wanted to live in each moment and remember as much I could. I had prepped myself to the point that I hoped that I wouldn’t have to “think” so much about what I was doing but rather just live it like second nature. Fortunately, I got to do just that and loved every second that I got to perform for these people with this excellent band. Finally, I got express myself with my words and music in my own voice directly to the ears of the people watching. I hope to do so again in the future but November 9, 2013 will always be a landmark night in my personal journey.

Here’s a video of the entire show.

Check out the gallery of pics from the event.