Return to the Batcave

Return to the Batcave

This past Sunday (05/01/05), Vickie and I took a trip up to Bronson cave, more importantly known to us as “THE BATCAVE.” This time, I went back with costume in tow. One just has to do things like this every once in a while.

For those who have followed any of my previous adventures, or have been up to the cave yourself, you’ll know that there is a bit of a hike to get up to the cave since the roadway to it is gated and locked. But this time as we drove by the gate, it was opened with a sign that said, “Trucks, Film” with an arrow pointing up the trail. I was a bit worried that the area would be shut off from us if they were filming up there. There’s a lot of film friendly terrain up there to choose from for locations and the park is often used. I wasn’t in costume except for my tights under a pair of sweats and we walked up the path first to see if the coast would be clear. Eventually, we came to the area and saw cars, trucks, trailers and craft services (food). A guy dressed in black slacks and equally black Polo style shirt that read “CAST SECURITY” approached us as we came closer to the area. I had a bad feeling about this.

He informed us that there was filming taking place. I told him that the cave that wasn’t being used in the shooting (which was taking place about 80 yards away on a cliff face) was the original Batcave for the TV series and that I had brought a costume to do some poses in front of it. He looked around over his shoulders as if to see if 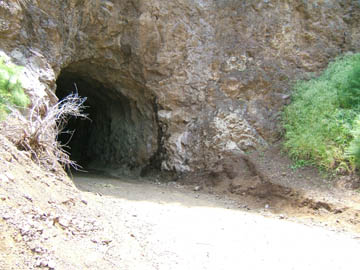 anybody else was seeing us and said, “Go ahead, you can park over there” That was great to hear that I didn’t have to make the hike in the suit since it was already getting pretty hot.

We went back down, drove back up and I suited up. We walked back over to the cave area. There was a huge power generator staged near the entrance of the cave that was being used for the shoot so this limited the angles available.

We started to try and take some pictures only to find out that the batteries had been low and the camera was shutting off on Vickie instead of actually taking a picture. We brought a pack of batteries, so that was an easy fix although things like, ” I told you in the car…” “Well I was busy unpacking your utility belt…” playfully went back and forth.

As we started again, I noticed a lady coming up the road with a little boy who was possibly three or four years old. She stared with her mouth dropped and the boy looked at me standing in front of the cave in awe. I gestured to the boy that it was okay to come up to me and smiled. He came trotting over and took my hand and stood by my side as if waiting to get a picture. His mother was much closer now and said, “I brought him up here to see the Batcave because we now have the movie on DVD and I kind of remembered it was out here. Wouldn’t you know this is the ONE time I don’t have a camera and I take one with me EVERYWHERE.” I could imagine their surprise. I mean, what would you think if your mom took you to the Batcave and BATMAN was standing there! Sure, you would tell your friends and family, but would they believe you. And years later as you got older, would you even think that it really happened or was it an old childhood dream. 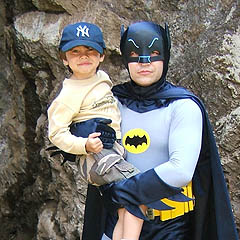 I asked the lady if she had an e-mail address and that we could take a few pictures for her and would send them. She was VERY grateful. So I asked the little boy his name and he said, ” enk… grbl..um… zhgfjst..” He was still in shock. So I asked his mother. She said his name is Zion. What a sweet kid too.

No sooner than our photos with him finished, people form the filming crew and security start coming up. “Oh no, we’re getting shut down,” I thought. I was wrong. They all brought their own cameras and cel phone cameras with them for pictures with Batman. Too funny. Unfortunately, I didn’t get any of my own pictures with them for myself. That’s often the case. In the end, we managed to get some nice pictures and met some wonderful people. 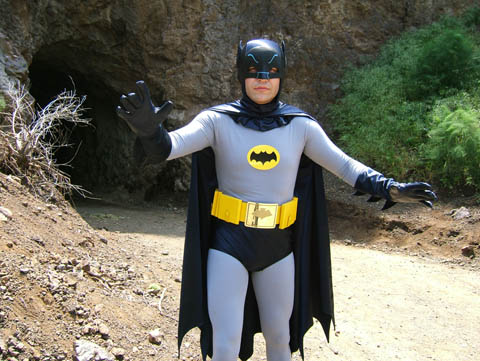