George Barris was honored by the City of Toluca Lake and the North Hollywood yesterday. They named the little side street next to his shop after him, “George Barris Place.” In celebration, George’s people had the street roped off, a stage set up, celebrities invited and many of his cars that he had auctioned off two years ago invited to be on display. From George’s personal collection, he had the Monkeemobile, Munster Coach and the #1 Batmobile on display in front of his shop for all to see. A mural was painted on the freeway wall that is the dead end of the street with a Batmobile coming out of the Batcave. Bo Derek, Erik Estrada and Butch Patrick were among his many guests. It was a very special day for a special guy.

Now for the back story. I went to George’s shop about three weeks ago to buy a new baseball cap since mine was starting to show some wear. I met up with his secretary Kathy and his daughter Joji. Kathy told me that the #1 was in the garage there since the Mattel people had it brought in from the Petersen Museum to scan it for their upcoming 1/18th scale Hotwheel.  They invited me to go into the garage to go check it out. Of course I did. I walked into the garage and there was George going through some boxes and placing some folders on the back hood of the car. I guess you can do whatever you want to it if it’s yours. George said hi and I oogled over the #1. Meanwhile he looks over to Joji and says that I should come out in my costume for the upcoming street party. I said that I would love to but wanted to know when it would be. They said it would be on a Friday. That presented a problem for me since Fridays are my busiest days at work and for the past few months my Fridays have been impossible to pull away from for the day. I told them that I would look into it and get back with them.

The following two Fridays were very difficult days and convinced me that I may not be able to break away from work to do this. Kathy called me back and I told her that I didn’t think I could make it. I even called my friend John Whitt (aka Mauled Vader) to see if they could still get a Batman there but of course the short notice made a feasible trip from Minnesota out of the question ( he really needs to work on those frequent flier miles). Another conversation with Kathy gave me some hope to a solution. She said that they would really love to have me there for the ceremony part of the celebration that would be during the first hour of it around lunchtime for me. Once again, many things hanged in the balance as to the workload of my job and that Friday as to whether I could break away for an “extended lunch” to rush over there, change, shake some hands and take some pictures with George and get back to work and still take care of my other responsibilities. Wally and I even called another friend of his to see if he might be able to do it in a pinch but I knew I really wanted to be there for George.

In the end, I didn’t have a final confirmation for them until the day before the event. In the matter of minutes my cell phone started ringing off the hook so to say from Kathy, Wally and my District Manager (who I let know that I was taking an extended lunch on Friday to go across town to run an important errand). I gave them the go that I would be available for about one hour. Wally made a call out to one of his former Robins, Jonas, to see if he could show up. Jonas then called me in less than 15 minutes to work out our plans. This thing was really going to happen. Later that afternoon Wally called me again to say that he might be able to line up a Batgirl and Catwoman since Vickie was going to be unavailable ( darn weekday events) but needed her Catwoman wig for one of the girls. Not a problem and a delightful addition to the event.

I picked up the Robin costume from Wally’s, got my stuff together the night before and somehow still managed to get some sleep while I kept going over the timeframe in my head. Friday came, the plan ran like clockwork. Jonas and I pulled up in our respective cars right on time in spite of LA traffic. Suited up and met up with Batgirl and Catwoman who were dropped off by Wally right on time. George was delighted, the place was packed and the sun was shining. Jonas is a great guy and a blast to work with as a Robin. We had lots of fun with it for the relatively short time in which we were there but at least we were there for the key news coverage and photo ops for George. What a great day. It just goes to show you that if there is any possible way to make something happen, just do it and you’ll never look back going, “I should have…”

One last note: I didn’t bust out my own camera since I didn’t have a person to follow around and I didn’t want to carry it while I should be concentrating on the gig at hand. Wally took a lot of pictures as did Ruben Procopio, George’s people and others.  Thanks to everybody who hooked me up with the images.

Thanks Wally for what you did to help take this event to the next level for George!!!! 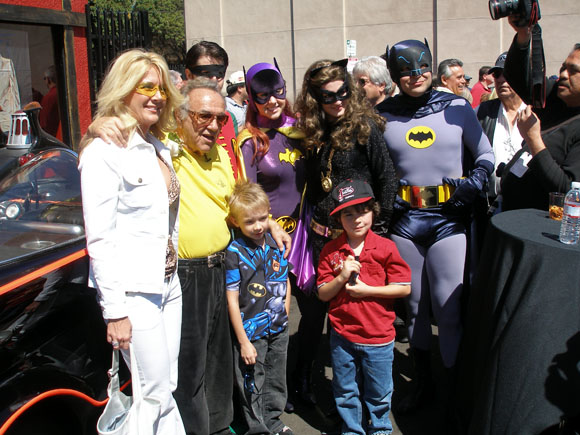 Amazing when a plan comes together and kids get to enjoy it. 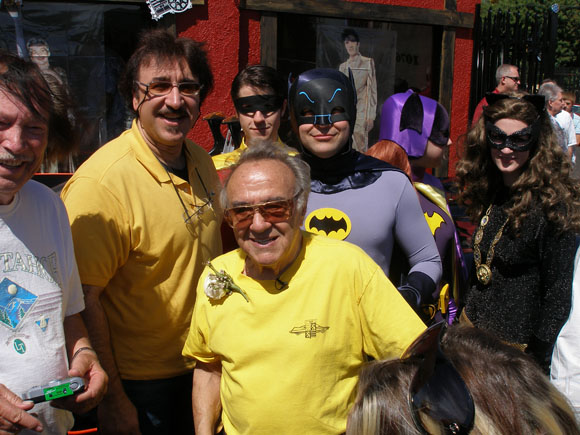 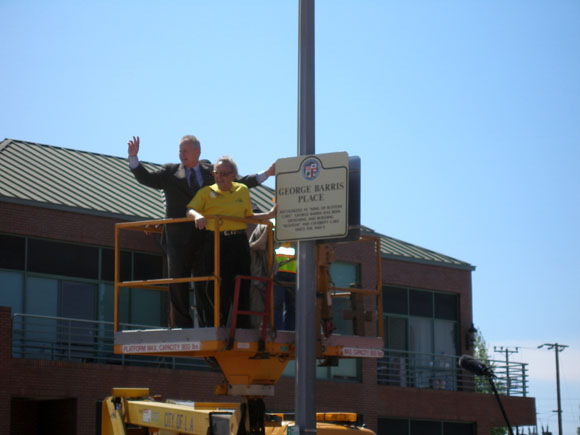 The unveiling of the plaque. 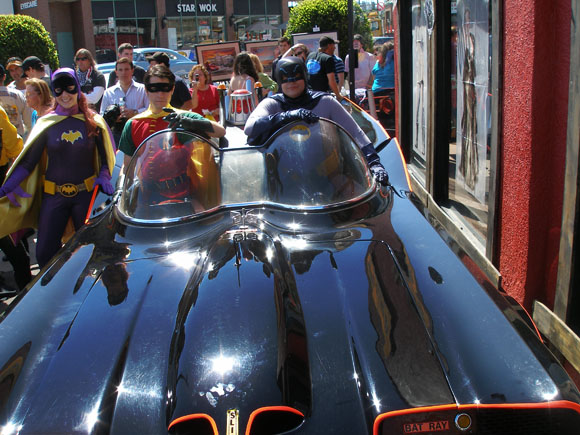 This picture needs no explanation. It’s the #1!! 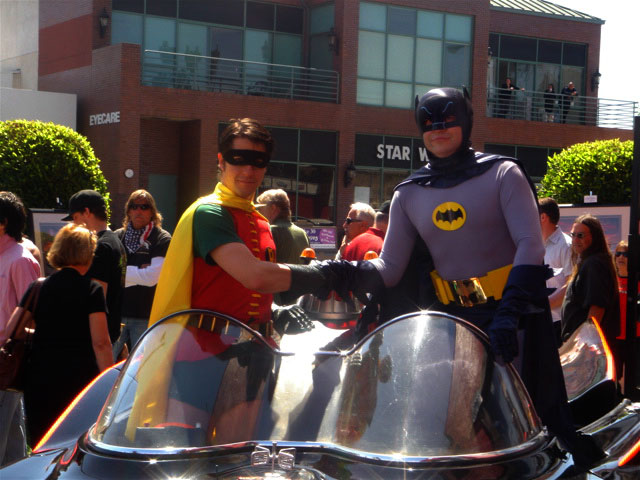 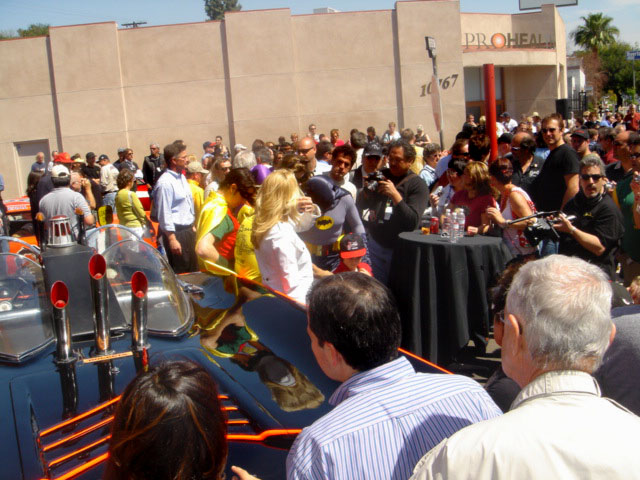 What a great crowd that showed up for George! 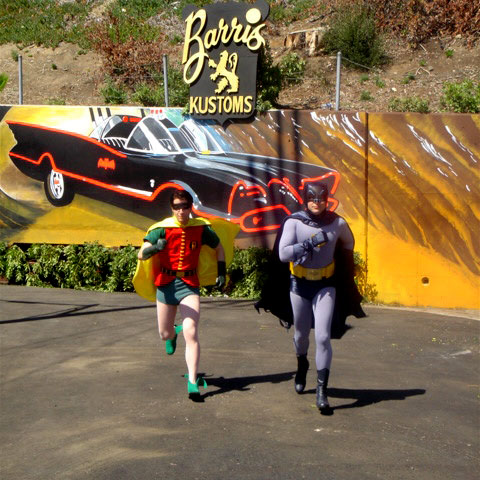